Cara won the model of the year award in 2012 & 2014 at the British Fashion Awards. Cara was born on August 12, 1992, in Hammersmith, London, to Charles Delevingne & Pandora Delevingne.

Delevingne has two siblings, Chloe & Poppy, and a half-brother from her father’s side. Dame Joan Collins & Sir Nicholas Coleridge are her godparents.

Cara attended All Girls Francis Holland School. After completing her GCSEs, she went to Bedales School to learn drama & music.

Later she didn’t finish drama school and followed in the footsteps of her sister Poppy in modeling.

Cara got her first modeling job when she was ten; she did an editorial for Vogue Italia with photographer Bruce Weber and model Lady Eloise Anson.

Storm Management signed her. Christopher Bailey of Burberry scouted Cara in 2012; he got her to walk in Burberry’s 2011 campaign spring/summer.

Her debut catwalk was at London Fashion Week in 2011. She started 2012 by walking for the haute couture spring show of Chanel.

Walking for Chanel began a long-lasting working relationship with the creative director & head designer of Chanel, Karl Lagerfeld. In the following years, she walked for almost all the fashion houses during the Fashion weeks for both seasons.

Cara appeared alongside British supermodel Kate Moss for a Burberry advertisement for the My Burberry fragrance. Delevingne did various advertisements for DKNY, YSL Beaute, Pepe Jeans, Alexander Wang, and Mango with Kate Moss and Tag Heuer.

She also appeared on Vogue, Love & The Wall Street Journal magazine covers. Rimmel chose Cara to be  Rimmel’s face, along with Kate Moss & Georgia Jagger in 2016.

Cara was on the cover of online magazines Net-a-Porter, and The Edit. She graced the covers of V, Glamour, British GQ, Elle, Vogue Paris, and Elle Australia. She starred in advertisements for Dior beauty.

Cara got her first role in a feature film in 2012, Anna Karenina, an adaptation alongside Keira Knightley. She even lent her voice as DJ of a radio station in the video game Grand Theft Auto V.

Cara made her TV debut in Playhouse Presents. She was seen in the psychological thriller The Face of an Angel with Kate Beckinsale.

She starred in an adaptation of the novel by John Green Paper Towns, played Enchantress in Suicide Squad, and appeared in Luc Besson’s Valerian and the City of a Thousand Planets with Rihanna. 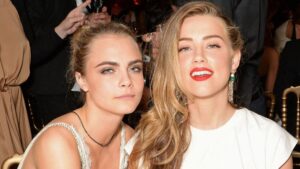 Also Read : Who Is Dora Dating? Everything You Should Know!

In 2013, Cara was reportedly dating Jake Bugg, a teenage sensation at the time; they met through their mutual friend Rita Ora. They split a few months after the news of them together came out.

In September 2013, it was rumored that Harry Styles & Cara were seeing each other; Harry liked Cara and wanted to be exclusive with her.

Michelle Rodriguez dated Cara at the beginning of 2014. Michelle confirmed the relationship, but they broke up a few months later. Then, it was Jack O’ Connell in late 2014.

At present, Cara Delevingne is single and not dating anyone. She identifies herself as gender fluid and uses she/her pronouns.

Q: Has Cara ever dated a man?

A: Yes, Cara dated Jack O’Connell in 2014 briefly. And Cara also dated Jake Bugg, who she met through Rita Ora.

A: Yes, they are second cousins.

Q: How did Cara Delevingne get wealthy?

A: Cara has amassed a fortune of 100 million pounds before her 30th birthday, all thanks to her work as a model, actor, and family property firm.

Q: Does Cara have any siblings?