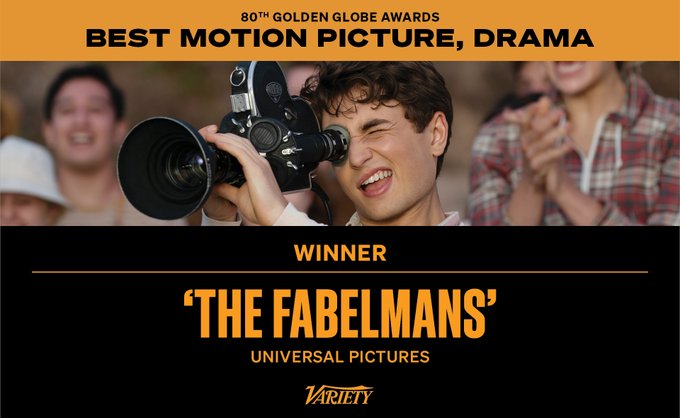 The Fabelmans, a Steven Spielberg film, will be released by Reliance Entertainment in Indian theatres on February 10, 2023.

An amazing moment for Steven Spielberg! Congratulations on your WIN for Best Director – Motion Picture for the film @thefabelmans! 🙌

Tune in to the #GoldenGlobes LIVE on NBC and Peacock! pic.twitter.com/M7xT6HkDdw

The Fabelmans, directed by veteran director Steven Spielberg, is a 2022 American film that Tony Kushner also co-wrote and co-produced. The film, based on the story of Spielberg’s youth and formative years as a filmmaker, is loosely semi-autobiographical.

It is a very intimate portrayal of an American upbringing in the 20th century. The movie studies love artistic aspiration, sacrifice, and the epiphanies that help us clearly and compassionately perceive the truth about our parents and ourselves. It is a universal coming-of-age tale about the aspirations of a lone young man.

Tony Kushner, the winner of the Pulitzer Prize, and Spielberg collaborated on the script, and the latter’s writings for Steven Spielberg’s Munich and Lincoln have earned him Oscar nods.

Paul Dano,  Michelle Williams,  Gabriel LaBelle, and Julia Butters are the stars of The Fabelmans.

On September 10, 2022, The Fabelmans made their global premiere at the Toronto International Film Festival, where it took home the People’s Choice Award. On November 11, it had a limited theatrical release in the US; on November 23, Universal Pictures expanded it.

The cast’s performances, the screenplay, the cinematography, Spielberg’s direction,  and the musical soundtrack by John Williams all won high praise from critics. The American Film Institute and The National Board of Review rated it as one of the best ten movies of 2022.

The movie had a $40 million budget, but it only made $17.1 million at the box office, the worst ever for a Spielberg production.

The reaction of Reliance Entertainment

Happy to have the movie out, Reliance Entertainment’s Head of International Businesses, Dhruv Sinha, said, ”

“We at Reliance Entertainment are incredibly proud of our long-lasting and fruitful partnership with Steven Spielberg’s Amblin Entertainment. This connection has paid off, with movies including “The Help,” “War Horse,” “Lincoln,” “Bridge of Spies,” “The Post,” “Green Book,” and “1917” among others garnering awards at the Oscars and Golden Globes.”

“We’ve brought to cinemas in India these creative masterpieces, and now on the same scale, we bring ‘The Fabelmans’ to audiences on February 10.”

The Kartik Aaryan-starring film Shehzada will compete with The Fabelmans on February 10 because both movies are scheduled for release.