The pop-rock band Panic at the Disco, founded in Las Vegas about 20 years ago and eventually evolved into Brendon Urie’s solo project, decided to disband following its next European tour on Tuesday morning.

The solo project of American artist Brendon Urie is Panic! at the Disco. Urie,  Spencer Smith, Ryan Ross, and Brent Wilson, childhood friends, started it as a pop rock band in  Nevada, Las Vegas, in 2004.

Urie and his wife are expecting their first child, and he declares, “I’m going to close this chapter of my life and devote all of my attention to my family.”

With that, the band Panic a the Disco will no longer exist.

The final tour starts on February 20 in Vienna and ends on March 10 in Manchester, England. The complete statement from Urie is given below.

“It’s been a terrible journey, to be sure.
I could never have predicted the direction my life would take while I was growing up in Vegas. There are many places in the world, not to mention all the folks we’ve met along the journey.“

“But occasionally, a journey must end so that another can start. Although some of you might have heard, we have tried to keep it to ourselves. Sarah and I are going to have a baby shortly! It’s beautiful and humbling to think about being a father and seeing my wife becoming a mother. This next journey excites me.”

Fans are amazed at Brendon Uries’ decision to “break up” his band.

brendon urie writing a letter about panic at the disco “breaking up” (idk how u break up when it’s just u and touring members) but being the only one to sign it bc he’s literally the only member of the band is so fucking funny. i guess the dead horse stopped spitting out money!!!

Some Details about Panic at the Disco, the rock band

When Urie and fellow co-founders Ryan Ross, Brent Wilson, and Spencer Smith were in high school, the band—which has since recorded seven albums—was founded. The following year, they released their debut album, “A Fever You Can’t Sweat Out,” which launched them into popularity because of the smash hit “I Write Sins Not Tragedies.”

In the US, the album received triple platinum certification. Brent Wilson, the band’s original bassist, was dismissed in 2006 while on a lengthy world tour and was soon replaced by Jon Walker. The song “Nine in the Afternoon” was released before the band’s second album, “Pretty. Odd. (2008).”

That record significantly altered the sound of the band’s debut. Despite their support for the band’s new direction, Ross and Walker left the band because Urie and Smith wanted to change it’s aesthetic further. After that, Walker and Ross started a new group called the Young Veins, leaving Urie and Smith as Panic! at the Disco’s only surviving members.

To continue performing live as a pair, Urie and Smith enlisted bassist Dallon Weekes and Ian Crawford,  guitarist, as touring musicians. The new track they released for the movie Jennifer’s Body was “New Perspective.”

In 2010, Weekes got added to the group’s lineup as a permanent member. Vices & Virtues, the band’s third studio album, was recorded by Urie and Smith alone in 2010 and was produced by  Butch Walker and John Feldmann. Once Vices & Virtues’ 2012 tour cycle was up, Crawford left.

Too Weird to Live, Too Rare to Die!, the group’s fourth studio album, was created and published in 2013 by the trio of Urie, Smith, and Weekes.

Smith unofficially left the band before the album’s release owing to health and drug-related concerns, leaving Urie and Weekes as the remaining members. The duo hired Dan Pawlovich and Kenneth Harris as touring musicians for live engagements.

Smith stopped doing live shows with the group in 2013 and finally left in 2015.

Soon after, Weekes resumed his role as a touring member, which led to Panic! becoming Urie’s solo act.  “Hallelujah,” the first single from Panic! at the Disco’s fifth studio album, Death of a Bachelor (2016), was made available in April 2015.

Weekes formally announced his resignation from the band in December 2017. “Say Amen (Saturday Night),”  the lead single from Panic at the Disco band’s sixth studio album, 2018’s  Pray for the Wicked, was made public in March 2018. Viva Las Vengeance, the seventh studio album, was released on August 19, 2022.

Urie announced that Panic! at the Disco would break up after the Viva Las Vengeance Tour on January 24, 2023. 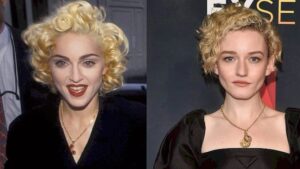 Previous post Julia Garner-starring biopic of Madonna has been shelved 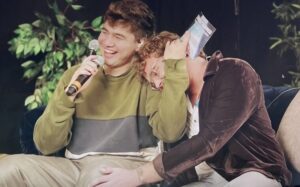