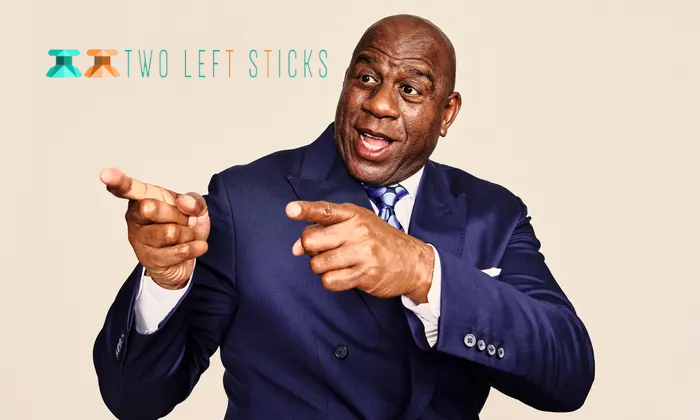 Earvin ‘Magic’ Johnson Jr. is a retired American professional basketball player born in Michigan, US, on August 14, 1959, and a former president of the Los Angeles Lakers of NBA basketball operations whose current net worth is estimated to be $620 million, updated in 2022.

Johnson was born in Lansing, Michigan, in a large family of 12 people. He has nine siblings to grow up with. His dad worked for the General Motors plant in the local town, and his mom worked as a custodian at a local school. Johnson discovered his passion for basketball at an early age, he used to make his fellow brothers play with him all the time.

His passion grew along the way. But he also sang with his friends around the corner of his street; It was his favorite idea of hanging out back in childhood. He completed his high school at the Everett High School, played basketball for the school team in 1977, and won the Michigan State High School Championship. Johnson then attended college at Michigan State University as a sophomore and won the national collegiate championship. He was given the MVP title that year.

With his flying talent in school and college, Johnson joined the Los Angeles Lakers of the National Basketball Association in 1979, becoming one of the most talented and famous basketball players.

His team won the Pacific Division title in 1979-1980, then they won against the 76ers for the NBA title; he also won the MVP title and became the youngest one to attain it for the playoffs.

His shining graph on the court got him to the list of the top 50 greatest players in the history of the NBA.

Magic was born to a hardworking couple, Christine and Earvin Sr. Johnson, the fourth child of all the siblings. Their entire family is devout Christians. While his father worked at an auto factory, his mother worked as a school custodian. Johnson has a sparkling basketball career and is well settled. He married his long-term friend Earletha ‘Cookie’ Kelly in 1991, and they gave birth to a son in 1993. In 1995, they planned on having another child but instead ended up adopting a baby girl. Johnson also has another elder son Andre Johnson born in 1981 with his ex-girlfriend Melissa Mitchell.

Right after he got married, Johnson discovered he had HIV during a routine checkup for an insurance policy. He admitted to his promiscuousness as a sports celebrity’s lifestyle but never suspected having the disease. His team’s physician advised Johnson to quit basketball immediately, for his immune system was not at its best.

He soon made a public statement about quitting the Lakers and why. The fans were shocked and disappointed that they won’t get to see him on the court.

It was a life lesson for Johnson, and he became quite the spokesperson for AIDS awareness. He also founded the Magic Johnson Foundation for HIV/AIDS education and cp-wrote What You Can Do To Prevent AIDS.

Once he was improving, he soon made a comeback in 1992, but it was a short return as he had to retire for the second time for the sake of other players and the family.