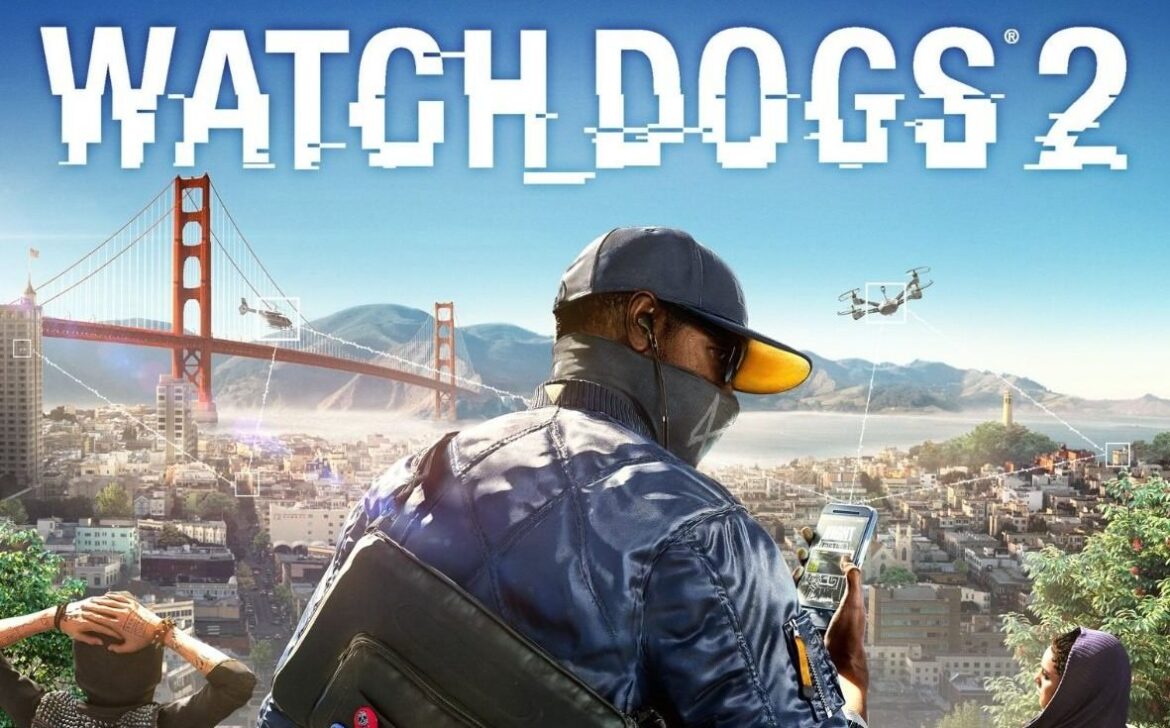 Watch Dogs 2 improves on almost every idea presented in its predecessor by adopting the hacktivist philosophy. It gives players more opportunities to hack their environment, a more engaging protagonist, and a more interesting world to explore.

There will likely be countless comparisons made to what Assassin’s Creed 2 did for Ubisoft’s other major franchise, but Watch Dogs 2 is much more a refinement than an expansion of the 2014 original.

The original Watch Dogs was dark, grim, and humorless. Ubisoft Montreal had a pulp revenge story and took it so seriously that it drained all the life out of it. They’ve definitely learned a lesson from their previous effort.

Watch Dogs 2 is as light, fun-filled, and humorous as the original was dark and gritty. Marcus Holloway, the Oakland-born protagonist featured this time around, is full of personality and seems to actually be having fun while hacking. He’s a long way away from Aiden Pearce, the original’s Liam Neeson-lite protagonist. Actor Ruffin Prentiss deserves credit for bringing out Marcus’ fun-loving and driven sides in equal measure.

It shouldn’t be necessary to say this in 2016, but Ubisoft also deserves praise for the diversity of its characters. Race is an implicit and explicit part of Marcus’ story. He’s not defined by his race, even though it plays a part in his story. There are characters of all genders, races, and sexual orientations as well (it’s worth pointing out Ubisoft has a major transgender character as well).

Marcus is motivated more by politics than personal motivations, but writer Lucien Soulban wisely keeps the politics personal. Marcus, a self-taught hacker, has been mistreated by the state and joins up with hacktivist group DedSec. He wants to punish those who would use information to manipulate the public, including government agencies and corporations.

Read This Out: Xbox One Headset Volume Issues

DedSec’s primary target is the Blume corporation, an entity those who played the first game should be familiar with. After the events of the last game, Blume is using San Francisco as the next site for its invasive cTOS (Central Operating System).

Over the course of the game, players will help Marcus and DedSec sabotage corporate and state interests. Every hack or marketing move gives DedSec more followers, who can be used to crowdsource computing power for future hacks.

The opening mission puts players right into the action, as they help Marcus through his DedSec “tryout.” It’s a good introduction to the character – it ends with Marcus literally flipping off the police as he jumps down an elevator shaft – but rushes the introduction of DedSec.

The members of DedSec don’t really become characters the player cares about until later in the game. The fact that Marcus and the members of Dedsec are already great friends 30 minutes into the game doesn’t help. Having a more in-depth introduction to the members of Dedsec would have helped develop their characters in a more natural way. Instead, the player only really comes to know them through doing side quests for them, and even then some of them are never more than “types” like the “antisocial hacker.”

Ubisoft Montreal rushes players through this introduction in order to set them free in the Bay Area. San Francisco’s sunny, graffiti-covered streets are the perfect setting for Marcus’ journey. It’s another one of Ubisoft’s beautifully realized worlds, nailing the tech-obsessed, health nut, and slightly offbeat reality of the Bay Area.

The setting and tone really play into the counterculture aspect of hacking that was missing in Watch Dogs. Graffiti, hip-hop, and digital revolution exist hand-in-hand in the sequel, giving the world a unique rhythm and feel. Unfortunately, some of the characters (I’m looking at you Wrench) do come off as a bit forced and the abundance of neon colors can be a bit overwhelming.

Of course what players do in a world is just as important as the world itself. Watch Dogs 2 luckily provides players with enough variety to keep things fresh for most of the game’s length.

Shooting straight through the main story missions is an option, but many of the entertaining side missions would be missed. Players can acquire these from their DedSec buddies and random NPCs. These missions are usually just as robust as any main mission, and really see Ubisoft having some fun.

One mission, in particular, has players trying to recruit a movie star into DedSec by severing his connections with a Scientology-like religious group. Touches like this really bring Ubisoft’s version of San Francisco to life, while also adding some satire and social commentary.

Watch Dogs 2, like the original, mainly consists of players driving, shooting, and hacking their way through missions. Cover-based stealth combat is still the baseline here.

But Ubisoft Montreal has refined all of these features in order to make playing Watch Dogs 2 a more fun, creative, and dynamic experience.  Driving feels less sticky than before, giving players more control over their vehicles. The cars still feel a little too heavy and grounded to the street, but it makes sense when you’re zipping over the many hills of San Francisco.

San Francisco as a setting does provide players with the opportunity to drive new vehicles. ATVs can be used to drive through the forests that surround the Bay Area with ease and sail boats are a neat way to experience the city. Boats feel a bit unnecessary still. Most players will never touch them, but they are used in interesting ways in certain side missions.

Shooting is still the weakest part of the game. Cover-to-cover movement is a lot easier now, but shooting itself still feels dull. The guns don’t feel rewarding to shoot and enemies can easily take you down as you the further you progress through the game.  Blasting your way out of a situation is almost never the best way to approach a mission. Ubisoft does claim it’s a valid approach, but more often than not using stealth and remote hacking is the way to go.

Ubisoft has also increased the suite of hacks that players have access to, making hacking irresistible for even the most aggressive players.  Players can still hack into people’s cell phones, control traffic lights, and cause electrical boxes to explode, but because of Blume’s expansion of cTOS into cars, Marcus has the ability to control cars remotely.

This might not seem like a major change, but it completely alters what’s possible in and outside of missions. Driving down crowded streets is easier when players can hack other cars off the road. Cars also become remote-controlled weapons. Drawing a guard in front of a car and then remotely hacking that car into said guard will never get old.

Combining all of the games various hacks is incredibly rewarding and there is definitely room for creativity. The inclusion of an RC car and quadcopter/drone expands options even more, allowing players to complete missions without ever physically entering a room. Shooting is almost never required, and for a game with mediocre shooting mechanics, that’s important.

There are certain missions that require players to use force, which flies in the face of most of the game’s design. So much is left up to the player that it’s disappointing to see Ubisoft force players into a certain playstyle in these moments. 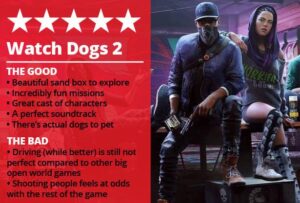 Players and Marcus end up having a lot of control over their environment. The idea that hackers have the same access to private information is not addressed nearly enough. It’s a theme that lies at the heart of the conversation around hacking, but the franchise has yet to really address it.

Watch Dogs 2 does delve into some other interesting ideas. There are moments when it analyzes social movements as brands, the public’s resistance to overturn systems that work for them on the surface, and even issues of racial diversity in tech. The game also does a great job of looking at how hacktivists are sometimes rejected by other hackers who only hack for the lulz. This is an intense divide in the hacker community, so it’s great to see it reflected here.

The story doesn’t always engage as much as it should due to some weak characters. Marcus remains a fun character, however, and the missions themselves are well-designed even when the story sags.

Watch Dogs 2 also has a significant online multiplayer component. Ubisoft has made a big deal out of its “seamless multiplayer.” Players can work together on multiplayer-specific missions or invade each other’s games.

Completing missions with the help of another hacker is fun. It allows for a lot of strategy and chaos in equal measure. One player can scout with the RC car, while the another player distracts enemies to let the RC car rove undetected. Unfortunately, the more competitive multiplayer activities –like Bounty Hunts – still feel intrusive and unnecessary.

The story doesn’t always feel as engaging as it should and the shooting is still lackluster, but overall Watch Dogs 2 is an incredible step forward for the franchise. With more hacking, a better protagonist, and a more rewarding gameplay experience Ubisoft Montreal has created an incredibly fun open-world game.