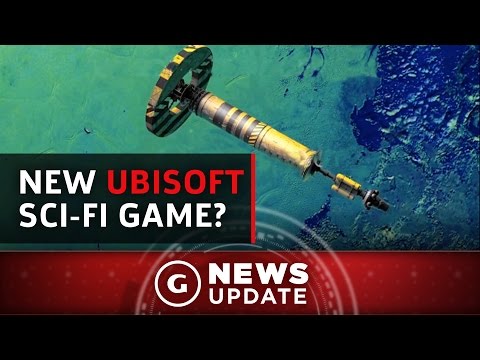 The release of Watch Dogs 2 this week brings with it a revitalization for the franchise, but it also brings something else. Hidden away within Watch Dogs 2 could be a tease of the next big Ubisoft property.

One of the many buildings in Watch Dogs 2 is none other than Ubisoft HQ. A fictional recreation, it’s nonetheless an interesting, and slightly meta, inclusion in Watch Dogs 2. However, what’s interesting about this is that players can hack the facility. Doing this not only provides a sense of fulfillment for the player, but it offers an interesting video tease.

Featuring watermarks stating it’s confidential and is a piece of E3 media, the trailer shows a unique sci-fi environment. With twangy music playing, the video shows various spacecraft orbiting planets with an art style reminiscent of No Man’s Sky and Cowboy Bebop. The video ends abruptly, without any other details.

A TEASE OR TRICK?

Skepticism is brewing as to the purpose of this video.  Some players believe the video could be a piece of content created for the fictional world of Watch Dogs 2. Similar to the references Naughty Dog has done with Savage Starlight in Uncharted and The Last of Us, the video could simply be a gag done by the development team.  Found within a side mission involving a Ubisoft employee, Marcus proceeds to “leak” this unannounced title, thus potentially making it a joke.  But this also could be a meta-marketing move done by Ubisoft to grab the attention of players.

In the past, Ubisoft has had several major projects leaked in one form or another.  Watch Dogs 2 was leaked several times, as was the concept of For Honor, and the yet to be revealed Egypt based Assassin’s Creed: Empire. So obviously Ubisoft is taking a jab at themselves within this Watch Dogs 2 mission, but is it something more?

Trying to keep a lid on things is hard for any game company to do. With only a few studios such as Rockstar keeping their office leak free, others, such as Ubisoft aren’t as lucky. This Watch Dogs 2 mission does raise the question of whether or not this is Ubisoft’s attempt at controlling the announcement rather than having it leak in advance.

Leaving a tease of an unannounced project in a released game has been done in the past.  Guerrilla Games left a Horizon easter egg in Killzone: Shadow Fall when that project was a mere rumor.  But the nature of this video would prove to be an interesting marketing tactic to take. Essentially, there’s no better way to tease a game and raise interest in it than having it be one of the major releases of the holiday season.

The quick nature of the games industry could provide more details on this Watch Dogs 2 video.  But if there is an air of silence, that could be a sign that this video is indeed a tease of something bigger, perhaps adding credence to the murmurs of Ubisoft doing a new sci-fi IP, an element that is lacking in their studio portfolio. With The Game Awards scheduled for next month, players may not need to wait long to see if Ubisoft is ready to enter the vastness of space.