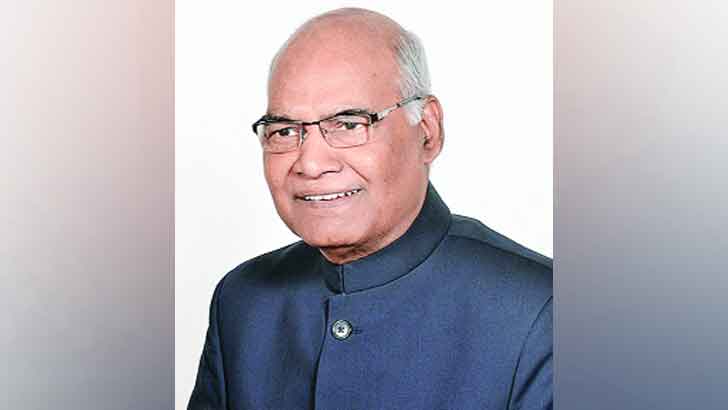 Indian President Ramnath Kobind is arriving in Dhaka today on a three-day state visit to attend the golden jubilee celebrations of the victory. This is his first visit to Bangladesh as President. All preparations have already been completed for the visit of the President of India to mark the golden jubilee of Bangladesh’s victory in the War of Liberation, the end of Mujib’s year and the 50th anniversary of Bangladesh-India diplomatic relations.

Although the main goal is to take part in various events of the golden jubilee of victory, various aspects of bilateral relations will be discussed. The President of India will present a T-55 tank and a MiG-29 fighter jet used during the Great Liberation War of Bangladesh as preservation and display at the Bangladesh National Museum.

President. President of India Ramnath Kobind is coming on this visit at the invitation of Abdul Hamid. The first lady and daughter of the President of India, Minister of State for Education of India, two Members of Parliament, Foreign Secretary and other high-ranking officials from various departments are expected to accompany her on the state visit.

During the visit, various issues existing between the two countries will be discussed. However, no agreement or memorandum of understanding will be signed between the two countries during the visit. Meanwhile, on the occasion of the arrival of the President of India, the main roads of the capital Dhaka have been decorated with the flags of Bangladesh and India. Strong security measures have been put in place, police said.

Foreign Minister Dr. who is visiting Turkey to give an official announcement (Curtain Raiser) on various aspects of the visit of the President of India. AK Abdul Momen spoke at a virtual press conference on Tuesday. Foreign Secretary Masood bin Momen, Bangladesh High Commissioner to India Mohammad Imran, Foreign Ministry Secretary (East) Mashfi bint Shams and Director General of Public Diplomacy at the Ministry of Foreign Affairs Harun Al Rashid were present on the occasion.

Foreign Minister AK Abdul Momen said India is a neighbor of Bangladesh and a genuine friend. Bangladesh and India are not just about borders. The unwavering support of this friendly country in the great war of independence of Bangladesh in 1971 laid the foundation of good relations between the two countries. Later, under the strong leadership of the Prime Minister, daughter of Father of the Nation Bangabandhu Sheikh Mujibur Rahman, Bangladesh-India bilateral relations became stronger and more dynamic.

On the same day, in the afternoon, at the South Plaza of the Jatiya Sangsad Bhaban, he will participate in the ‘Mahavijayer Mahanayak’ program to express his humble respect and gratitude to the Father of the Nation and to celebrate the passion and joy of bloodshed. The President, Prime Minister, Speaker and other dignitaries of Bangladesh will be present there.

On the third day of his visit, the President of India will inaugurate the newly renovated section of the Kali Mandir at Ramna, Dhaka and visit the temple. At this time, he expressed his interest in a brief exchange of views with the members of the temple committee. He will leave Dhaka for Delhi at noon after the state tour on the same day.