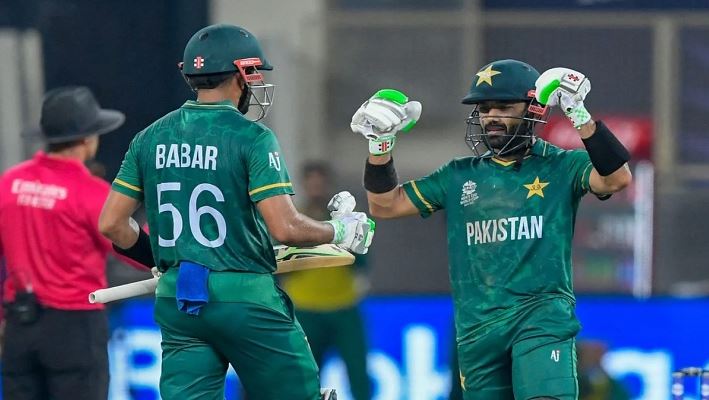 History!
World Cup: In the 50 overs or 20 overs version, Pakistan has never beaten India. Before that, I had to face 12 times and return every time with a rate. Today he was able to change the history of Pakistan.

All the legendary captains of the team have returned to the World Cup with the shame of losing to India. But that trend of history changed in Babar Azam’s Pakistan. Pakistan got off to a good start in the T20 World Cup by defeating India by 10 wickets in Dubai today. This is Pakistan’s first win against India in the ODI and T20 World Cup.

Earlier, India scored 151 runs for 6 wickets. It was not at all easy for Pakistan to chase the target in terms of Virat Kohli’s bowling prowess. But with the smooth batting of two openers Babar Azam and Mohammad Rizwan, Pakistan seemed to win before they realized anything!

After playing the first T20 World Cup of his career, Babar defeated India in the first match and made it clear that Pakistan is also a favorite in this World Cup. On the other hand, India could not take any wicket with the world-shaking bowlers like Yashpreet Bumra, Bhubaneswar Kumar and Mohammad Shamim. Virat Kohli will sleep tonight!

Shaheen Afridi will have a great sleep. Judging by India’s deep batting order, the collection is not very good. The contribution of the left-arm pacer is just great. In the first three overs of India’s innings, he picked up two dangerous openers, Rohit Sharma and Lokesh Rahul. He then picked up the fifth and picked up Kohli, who was waiting to pick up as many runs as possible in the last over, in 18.4 overs.

If Shahin Afridi laid the first foundation stone of this memorable victory for Pakistan, then Babar and Rizwan have done the rest. Babar was unbeaten on 6 off 52 balls. Meanwhile, Rizwan gave the captain a great support from unbeaten 69 off 55 balls.

After losing the toss, India lost two openers Rohim Sharma and Lokesh Rahul. Shaheen Shah Afridi came back to bowl in the first spell and caught the two openers in India. In his first over, he trapped Rohit in the leg before. He bowled Rahul in the next over. Hasan Ali returned Suryakumar Yadav who had a great start with Virat Kohli coming in three. He was caught behind with only 11 runs.

Kohli and Rishabh Pant put up resistance for the fourth wicket partnership. Pant broke this pair of 53 runs. He was caught and bowled by Shadab Khan for 39 off 30 balls. Rabindra Jadeja returned to the dressing room with a 41-run stand with Kohli on one side. Kohli picked up his first half-century in the World Cup during this partnership. Afridi stopped the pace of India’s run by returning the batsman who was sitting on the wicket. Kohli returned with 57 off 59 balls. India scored 151 runs in the allotted overs.