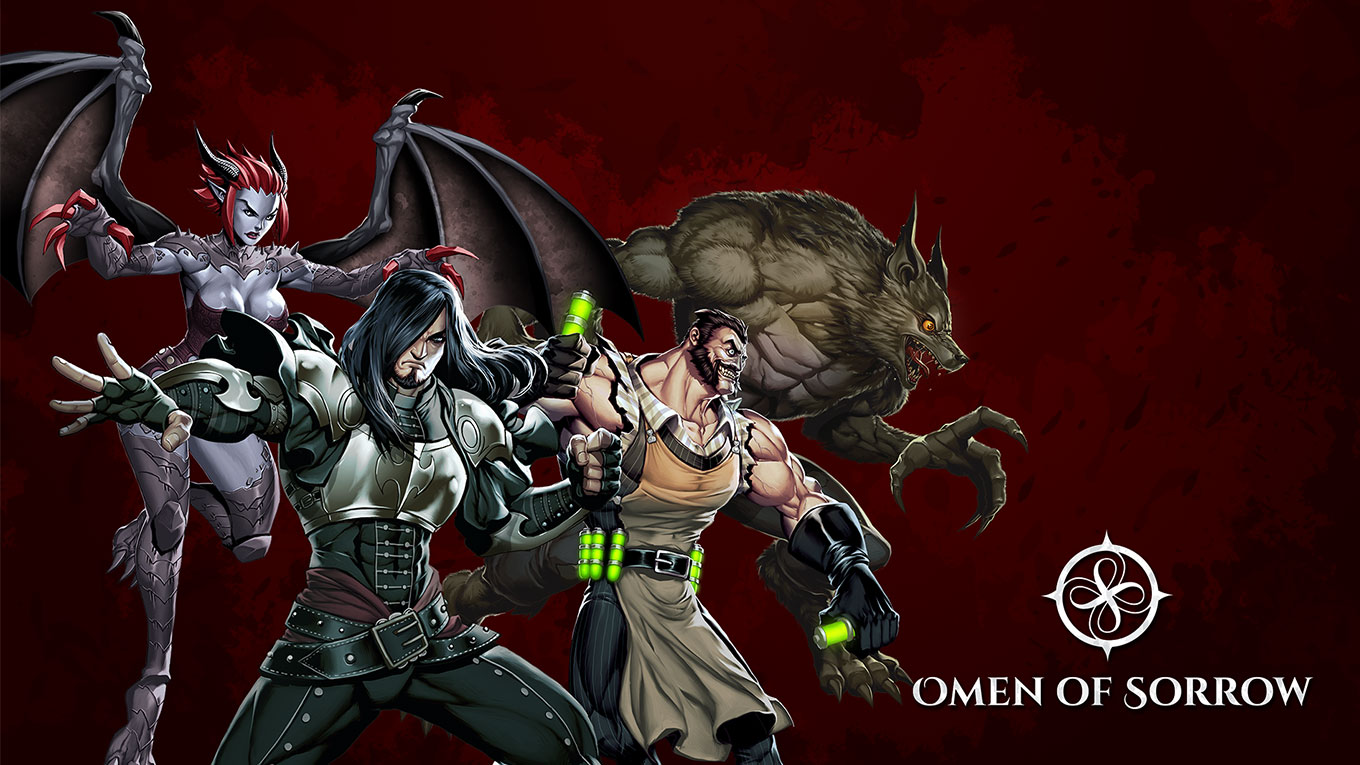 The premise of fighting games is one that’s simplistic, yet offers endless possibilities.  Facing an opponent, both in the fictional game world and that of reality, is one that fulfills the human instinct of competing to see who’s best.  With such an open template, almost anything can exist within a fighting game. Throughout the years we’ve seen titles featuring ninjas, beasts, and femme Fatales with an obscene lack of clothing.  Now the indie title Omen of Sorrow is offering a unique brand of horror set within fighting confines.

Inspiration comes in many forms, and with Omen of Sorrow, developer AOne Games is looking beyond horror to base their design.  “In terms of inspirations, there’s a whole swath of them! From great classics like the Last Blade, the King of Fighters series and the Street Fighter series, to so-called “anime fighters” like Melty Blood or Guilty Gear,” said Game Designer Felipe Munoz.

Ambition is also playing a key factor in what the team is hoping to achieve with respect to the premise and design approach.  “In terms of controls and “feel”, Omen of Sorrow uses 4 attack buttons, plus a dedicated Throw button and one “Special” button. It’s aiming to be more fast-paced than, say, Street Fighter 4, but less busy than the Guilty Gear or the Marvel series. We definitely want that focus on pacing and the neutral game that makes classic 2D fighters so enjoyable to watch. We also would like just the tiniest bit of that agility and mobility that you find on most anime fighters.”

Fighting games have generally kept to the basics over the years.  While some have introduced fancy mechanics or tag elements, others have stuck with the fundamentals.  The approach AOne is taking with Omen of Sorrow’s core is one that is balancing between offering something different, while not being too far off from player expectations.

“I wouldn’t be so conceited as to promise that any particular mechanic will be entirely unheard of or revolutionary. We want to offer incremental differences, rather than try to redefine the genre. We love the fighting game genre! It isn’t broken, so we’re not trying to fix it,” said Felipe.

“As far as giving it our own spin goes, the focus has mostly been on things like pacing and mobility. We have given a lot of focus to lateral mobility in the game, rather than vertical, and are trying to create a combat experience that has a lot to do with making the best out of spacing, resets, and approach. To that effect, we have introduced a “retreat” mechanic, for instance, as well as a couple of other surprises which you’re going to have to discover for yourself once you get your hands on the game.”

AOne Games’ central goal with Omen of Sorrow is to offer great mechanics with a diverse roster.  Launching with twelve characters, the team is ensuring that each feels balanced, and presents different play styles to take advantage of.  For Felipe, this has been an element which has proved to be an enjoyable challenge.

“We’re trying to create a cast with a diverse playstyle so that there’s a character for every kind of player. In our last demo, for instance, Gabriel was a sort of jack-of-all-trades, with a very straightforward fighting style. By contrast, Radegonda is an air-superiority character. Very mobile on the air, but somewhat defensive and fixed on the ground.”

“For people who prefer straightforward rush down, on the other hand, Caleb is exactly that: able to very quickly close the gap with his amazing normals, while keeping the pressure up with his good speed. Dr. Hyde is a somewhat unorthodox semi-grappler, with a wide array of tools to give himself an easier time against his opponents. But he’s very dependent on their proper usage, giving him more of a focus on smart decision-making and careful spacing. Creating mechanics for horror monsters is a treat for us, so expect a lot of variance between characters.”

BRINGING THE MONSTERS TO LIFE

Even with a modern twist, audiences would be keen to see a different, yet familiar, element within gaming. It’s this different perspective that AOne Games is hoping to capitalize on with characters such as Dracula.

“We thought it would be really cool to have horror monsters in our fighting game! It lets us use characters everyone is familiar with, and give them our own twist,” said Lead Developer Sebastian Gana.  While AOne is using known literary characters in Omen of Sorrow, they aren’t just using a basic outline. Instead, players can expect changes in characters such as Dr. Hyde when they experience Omen of Sorrow.

“It’s been really fun to give them a common story, and tweak them just enough to merge them into our own universe with their own motivations and personality,” said Sebastian.  Players afraid of major departures which do a disservice shouldn’t worry as AOne is honoring classic horror.

Speaking further, Game Designer Felipe Munoz said, “First of all we wanted to invoke classic horror tropes. We wanted to try and find those familiar places of horror literature and horror movies and try to tweak them just enough to make them our own, but not too much. We recognize that everyone who loves classic horror like we do would be looking to find them familiar. So we didn’t want to stray too far from that.”

Character is important to AOne with Omen of Sorrow, and so is the world itself.  With a horror core, how can a fighting game really establish itself within the genre trappings that players are familiar with?  It’s this same question that the development team has asked themselves, and are tackling in a different way.

“This is a fighting game, so even if we tried we wouldn’t be getting any scares from our audience—so we’re not trying. Instead, we’re trying to depict a world where that horror is real, even if it might not be for the player,” Felipe said. “At the same time, characters have to be cool enough for players to want to pick and win with them, which once again helps keep it more light-hearted and fun!”

The location is a key factory within any story, especially those which feature supernatural beasts preying on helpless victims.  Not forgetting this integral element, AOne is paying equal attention to the stages as well.  “We wanted to give a good amount of focus to the stages since there are so many cool locations in classic literature one can visit,” Felipe said.  “We feel stages can often be a bit neglected in fighting games. So that was design space that was ripe for the taking when it came to giving a nice, narrative flavor to Omen of Sorrow, and bringing forth the imagery and familiar faces of classic horror literature and film.”

In a manner of speaking, fighting games created by smaller development teams often hit a ceiling quickly.  If it’s not a case of lacking time to dedicate to the project, it’s a matter of technical issue arising.  Fighting fans want the best, and AOne is making sure to deliver.

“We’re a very small team. For starters, and we began developing the game at the start of 2015 with the most basic of levels.  We’ve had to basically remake the game whenever we found a new ceiling in quality.”

“Most complex have been the animation and programming. They’re completely pivotal to ensuring quality in the gameplay experience and require a lot of attention to detail,” said Sebastian. “We’re very aware of how much work there’s still left to do in order to achieve that level of gameplay we’re aiming for; which is the same high level of gameplay that we know the community will be expecting from us.”

Game development is global, but at times it’s still surprising to see talent come out of unexpected places.  Fighting games generally have their roots planted in Japan or even Chicago, and now South America is entering the mix.

“Working in Chile has advantages and disadvantages,” said Sebastian. “Some of the biggest disadvantages come from being so far away from the focus and center of the video game industry. It’s hard to demonstrate that from such a remote place that good, competitive products can be made in this industry. On the other hand, it’s an economic advantage as our living expenses are much lower.

“Our philosophy boils down to “we have to do by doing”, and it’s done well by us so far! Hopefully, it will also make our country proud by delivering a good result. We’re still not done, so we’d rather keep our heads down and make a game that speaks for itself.”

For such a young development team, AOne is going about Omen Of Sorrow with an approach that’s realistic and humble.  “Omen of Sorrow keeps us on our toes, demanding the very best from us on a professional level. There are a couple of videos going around the net of what we consider our learning period.  But we knew then—as we know now—that we have to go further still to fulfill the demands of the genre and our demands from ourselves. We’re constantly working to improve our craft and make sure both of those things happen.” said Sebastian.

The re-reveal of Omen of Sorrow last month at PSX not only showed the game to a larger audience, but it also reaffirmed the work AOne has done with the project. Dedicated to offering som