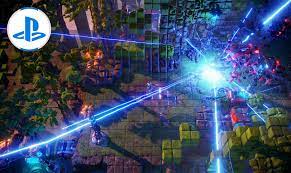 During the 1980s heyday of gaming, arcade games were king. The appeal of arcades came to an end as the industry bubble burst due to over-saturation. The arrival of home consoles didn’t help things either.

Over the past decade arcade games have seen a resurgence thanks to designers like Chicago-based company Raw Thrills‘ Eugene Jarvis and developers like Housemarque.

Jarvis is the creator behind the legendary arcade game Robotron. Meanwhile, Housemarque has made expertly crafted arcade games for over twenty years, especially with their PlayStation based titles like SuperStardust HD, Resogun, and Alien Nation.

These two venerable figures have joined forces to create the PlayStation 4 console exclusive Nex Machina, an arcade gamers dream. Nex Machina not only sees a continuation of Housemarque’s efforts but a spiritual successor to Jarvis’ Robotron.

“We met Eugene Jarvis at the DICE awards when Resogun was nominated, so 2014 I suppose,” said Housemarque’s Mikael Haveri. “That’s when we started talking about doing a game together. After that, it started with a prototype with the Resogun engine.”

The creative pairing of Housemarque and Jarvis is pretty close to perfect.

“It started as a fanboy moment for us and now has extended into a mutual understanding and love for the craft of gameplay,” Haveri recalled. “A beautiful harmony that is only disturbed by the occasional capitalistic realization that we are designing a product that does also need to sell.”

An Ode To Complexity

Like the arcade games of the past, Housemarque’s past titles have always featured simple controls.  Despite this set-up, Housemarque games have always found the right balance between being fun, difficult, and requiring skill. Housemarque is taking the same approach with Nex Machina, much in the same way that Robotron did years ago.

“Well take it like this, Robotron only had 2 sticks for controls, we’ve now added 2 buttons! Resogun, as simple as it was still used double the buttons that Nex currently has. For us this is the ode to simpler controls and the complex strategy within that,” Haveri said.

“We don’t want people to think too much into it, the game will speak for itself. It can capture a bit of the competitive community’s mindset without having a huge barrier to entry,” he continued.

Sticking To The Basics

This is Housemarque’s first collaboration, but the studio hasn’t changed their core development philosophy. The approach Housemarque and Jarvis have taken with Nex Machina is one which made early arcade games great.

“Our design philosophy always starts with ‘the game is the king.’ We iterate and reiterate on those core elements until things are fun and we can cut out the excess fat,” said Haveri.

“We wanted to create a worthy twin-stick that could return players to the magic of Robotron and Smash TV, but still create a game with a unique identity and something that could stand the test of time as well,” Haver said.

Over the years Housemarque has created a dedicated following of fans thanks to their titles.  Yet in the case of Nex Machina, they’re creating a game that has a strong heritage to live up to. Besides their own past, Nex Machina also has the longstanding lineage of Eugene Jarvis’ work to honor.

“Everyone can enjoy Nex. It does have elements familiar to classic arcade fans, but it is a modern arcade game. It’s tailored to the people that liked Resogun, so both ends of the scale in a way. It also wants to hit the right spots but doesn’t need to over perform with nostalgia.  Making Eugene proud was our primary goal, now it is about having the community embrace it.”

The Craft Of Game Making

As a developer, Housemarque delivers on all fronts. Besides their continued technical brilliance, the studio knows how to make a game that has players clamoring for more.

In the case of Nex Machina, Housemarque didn’t feel as if they had to top their previous efforts. Some developers may be keen to make each game bigger, but that wasn’t the case with Housemarque.

“When planning for Nex we never had the pressure of trying to be bigger than our previous titles, it was more about being smaller and understanding what that meant. Less Michael Bay and more enjoying the craft of making a game,” Haveri said.

“That doesn’t mean we won’t have crazy explosions, but rather that we needed to get the base setup right and take it from there.” Stripping the game down to its core was a challenge for Haveri and Housemarque. But figuring out what makes Nex Machina tick on a basic level was necessary for the team to be able to push mechanics further.

“Creating the simple things was easy at first and then got harder as things went on…A lot of the process was deep analyzing classic gameplay and looking at very minute details in timing and movement. Very existentialistic stuff in gameplay terms,” Haveri said.

Each Housemarque game has featured a style either based in pure arcade fantasy, or with a slight hint of realism like in Dead Nation. But Housemarque found inspiration in an unlikely way for Nex Machina’s art style.

“The visual style stems from a very technological perspective and in a way was an accident,” Haveri recalls. “We started with a need to take things further with our Resogun engine, something that we thought would be an easy job, but turned into a much bigger R&D project than intended… There was an idea of what it could look like and we thought it might be somewhat ‘retro’ and work as Resogun did.”

Mikael went on to say, “Nobody had done a game like this, so we didn’t have a visual reference of what it would look like either. It wasn’t an evolution of classic styles, but rather creating a new baseline that happens to be so early in the industry that it needed similar design philosophy for visuals as the early classics did. Working with actual constraints, rather than trying to emulate constraints to look retro.”

Housemarque has proven themselves to be masters of visual and technical design for a while now. With games that perform smooth, it’s brilliant to see a number of effects and visuals the studio can produce.  Nex Machina continues this tradition, though it proved to be a somewhat difficult endeavor.

As opposed to using an upgraded version of the Resogun engine, Housemarque opted to start from scratch.

“The only thing that Nex has from Resogun is the voxels. The way the voxels work is very different, so even that didn’t survive. Everything in the Nex environment is made from voxels that can be morphed from a cube to an assigned shape. This allows us to do a lot of ‘animated’ surroundings and so on. It can be an asset, but also comes with all new constraints as spec balancing is again very different than with any other title out there.”

“There are a few companies that are doing cool stuff with experimental tech (shout out to Media Molecule). It’s a very risky business to start focusing only on that,” Haveri warned. “Hopefully, more companies try out more experimental things in small increments so the industry as a whole can take leaps into unknown territory. But it’s usually not worth the time and money.”

Score based competition has always been a central element of Housemarque’s games. Nex Machina is no different, though the studio is taking it further. Rather than traditional leaderboards, Nex Machina will feature monthly tournaments for players to participate in.  This is a new path for Housemarque, but it’s a throwback to the days of arcade gaming and the evolution the gaming landscape has seen.

“Arcades are the original platform for competitive video gaming, so we’d like to kindle that flame a bit,” said Haveri. “We coined a new term called ‘single player e-sports,’ which doesn’t really intend to do anything more than group classic arcade gaming and speed running under a new term.”

Haveri is very aware of the community he and his team are trying to reach. Housemarque is looking to  “the less team oriented, but still very competitive gamers,” Haveri said. “The Tony Hawks and Usain Bolts of the Twitch.tv generation.”

Part of this on-going single player e-sports initiative Housemarque is pushing for will be the presence of daily challenges. A lot of that has to do with the fact that Nex Machina “is the first IP that we have ever owned,” Haveri said. “So our aim is to keep adding content if it is financially viable. We are making the kind of game we want, but for a community that is out there.”

With a potential Summer 2017 release, Nex Machina could end up being the perfect marriage of old and new styles. Between the legacy Eugene Jarvis has and the amazing skills of Housemarque, players could get the ultimate arcade game once Nex Machina arrives.  Of what Nex Machina offers, Mikael said it best, “The story and premise are simple, the controls are simple, it only gets complex if it grows on you.”