HomeCelebrityEmily Blunt Dating History! Everything About Her Relationships!
Celebrity

Emily Blunt Dating History! Everything About Her Relationships! 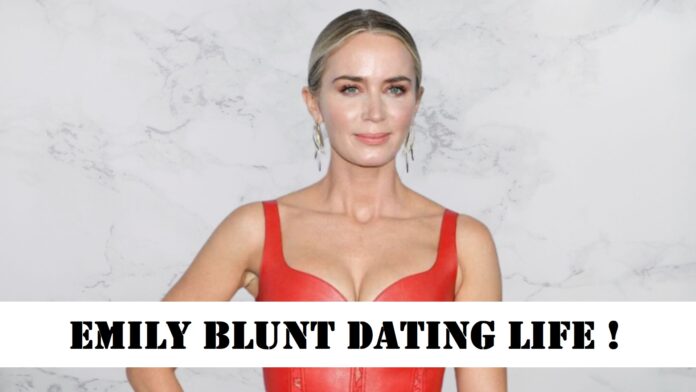 EMILY BLUNT DATING LIFE : Emily Blunt is a well-known British actress born on February 23, 1983. She has been honored with several prestigious awards, such as the Golden Globe Award and the Screen Actors Guild Award.

She has also been nominated for three British Academy Film Awards. In 2020, she was ranked by Forbes as one of the highest-paid actresses in the world.

Emily Blunt’s first debut as an actor was in a stage production of “The Royal Family” in 2001. She portrayed Queen Catherine Howard in the miniseries Henry VIII and starred in the British film Boudica in 2003.

Her debut on the big screen was in the film My Summer of Love (2004). The year 2006 saw Blunt break out into the mainstream with starring roles in the television film Gideon’s Daughter and the comedy-drama film The Devil Wears Prada.

Emily got critical acclaim for her performances as an FBI agent in Sicario (2015), an alcoholic in the thriller The Girl on the Train (2016), for which she received a BAFTA Award nomination for Best Actress in a Lead Role, and a surviving mother with her two kids in A Quiet Place (2018), that won her the Screen Actors Guild Award for Best Supporting Actress.

She reprised her role in the horror film A Quiet Place Part II, the sequel to the first one, and an action-adventure movie Jungle Cruise. Emily Blunt was born in London on February 23, 1983, to Joanna and Oliver Blunt. She is the second of four children.

She has three siblings one older sister and two younger brothers. Emily suffered from stuttering from seven to fourteen. One of her school teachers helped Emily to overcome her stutter through acting.

Emily Blunt went to Ibstock Place School in southwest London and, at age 16, when she was sixteen, she went to Hurtwood House, Surrey, a private college for sixth form popular for its performing arts programme. Emily was discovered by an agent there and signed her. 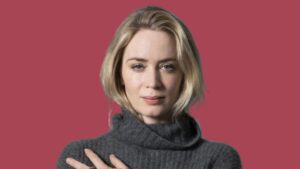 Blunt’s first appearance on stage was in the play The Royal Family by Peter Hall; she was in the role of Judi Dench’s granddaughter Gwen. Further, she performed at the National Theatre in Vincent in Brixton as Eugenie and played Juliet at Chichester Festival Theatre in Romeo & Juliet in 2002.

Emily Blunt made her television debut in the British drama Boudica, about the life of an ancient warrior-queen who fought against the Romans.

She was praised for her performance as Queen Catherine Howard in the British television drama Henry VIII.

Emily Blunt’s performance as Tamsin in My Summer of Love, an independent British drama, tells a love story set in the English countryside and revolving around two young women from different societal backgrounds.

In the British television drama Gideon’s Daughter, Blunt played the troubled only child of New Labour spin doctor Gideon Warner. Blunt was awarded Best Supporting Actress in a Series, Miniseries, or Television Film for her work in the drama, which was lauded for its “sterling performances” overall.

After that, she had a role in the comedy drama The Devil Wears Prada, which was about the fashion industry in New York City. Emily played the senior assistant to Miranda Priestly, the editor-in-chief of Runway magazine.

The movie was a critical and financial success, bringing in 326 million dollars worldwide. The performance given by Blunt was lauded.

As a result of her performance, Blunt was considered for two awards: the Golden Globe Award and the BAFTA Award for Best Actress in a Supporting Role.

Blunt’s fame was on the rise throughout 2007, during which she made appearances in the films The Jane Austen Book Club, Wind Chill, Charlie Wilson’s War, and Dan in Real Life.

Blunt was cast as Queen Victoria in the period drama The Young Victoria, which portrayed her reign and early married life with Prince Albert. Blunt’s performance got her critical acclaim and earned nominations for Best Actress for the Golden Globe Award and Critics’ Choice Movie Award.

Blunt starred in an adaptation of the classic horror film of 1941 horror flick The Wolfman. The film got primarily negative reviews. In the thriller The Adjustment Bureau (2011), Blunt is a dancer who is kept away from a politician for mysterious reasons.

The film garnered good reviews, with critical acclaim for Blunt and Matt Damon’s chemistry. Blunt was seen in the British film Salmon Fishing in Yemen. Emily’s character helps a sheik’s vision of bringing fly fishing, a kind of sport, to the deserts of Yemen, which results in their spiritual journey together. YSL made Emily Blunt an ambassador for their new fragrance Opium in 2011.

Emily starred in The Five-Year Engagement, a romantic comedy, along with Jason Segel, where both played a couple whose relationship suffers due to their engagement extension due to various reasons.

The film got a positive response. Emily did a science fiction action film, Looper; Blunt played Sara, a single mother who helps and falls for a time-traveler.

Blunt starred in an adaptation of a Japanese novel by Hiroshi Sakurazaka; she played a Sergeant in Special Forces in Edge of Tomorrow.

Blunt was cast as a Baker’s Wife in Walt Disney’s film adaptation of Into the Woods. The film was a success and earned positive reviews, with Blunt receiving praise for her singing and acting.

Emily became Kate Macer, an FBI agent in the crime thriller Sicario, assigned on a mission to take out the leader of a powerful Mexican drug cartel in 2015. The film was chosen to compete at the 2015 Cannes Film Festival for the Palme d’Or.

The film garnered critical acclaim. Blunt received praise as Kate Macer in the movie. She was cast in The Huntsman: Winter’s War, a sequel and prequel to Snow White and the Huntsman.

Blunt appeared in the thriller mystery The Girl on the Train, based on Paula Hawkin’s novel. Blunt portrayed an alcoholic who gets involved in an investigation about a missing person.

Emily returned in her husband John Krasinski’s horror flick A Quiet Place, about a family of survivors that are being harrowed by monsters that hunt by sound. Blunt played Mary Poppins in the fantasy film Mary Poppins Returns.

Emily is playing the role that Julie Andrews played in the 1964 film. Blunt returned to the horror sequel A Quiet Place Part II (2021), which was released after the pandemic. Since the pandemic started, the film was the first big Hollywood release in theatres. 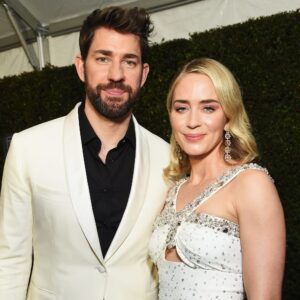 Emily Blunt had a three-year-long relationship with Canadian singer Michael Bublé. Things were quite serious between them, and they even lived together in Vancouver, Canada.

The two gushed over one another a few times in interviews, with Blunt confessing, “I get tears in my eyes when I see him onstage. It’s overwhelming,” while Michael said, “Every time I see her onscreen, I fall in love with her all over again.” Their split was confirmed by Michael’s representative in 2008. 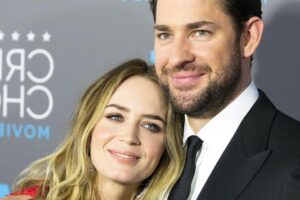 Emily and John were set up by Blunt’s ‘The Devil Wears Prada’ co-star Anne Hathaway. The matchmaking worked out. Blunt started dating John Krasinski. They were engaged in August 2009, and the couple married in July 2010, after two years of dating. They have two daughters.

Emily Blunt’s net worth is $80 million.

Q: How much did Emily Blunt make for Mary Poppins?

A: Emily Blunt was paid a remuneration of around $8-10 million

Q: What made Emily Blunt famous?

A: Emily & Michael dated for three years; they lived together but never got engaged. They called it quit in 2008.

A: Emily developed a stutter while growing up. She could barely hold a conversation.