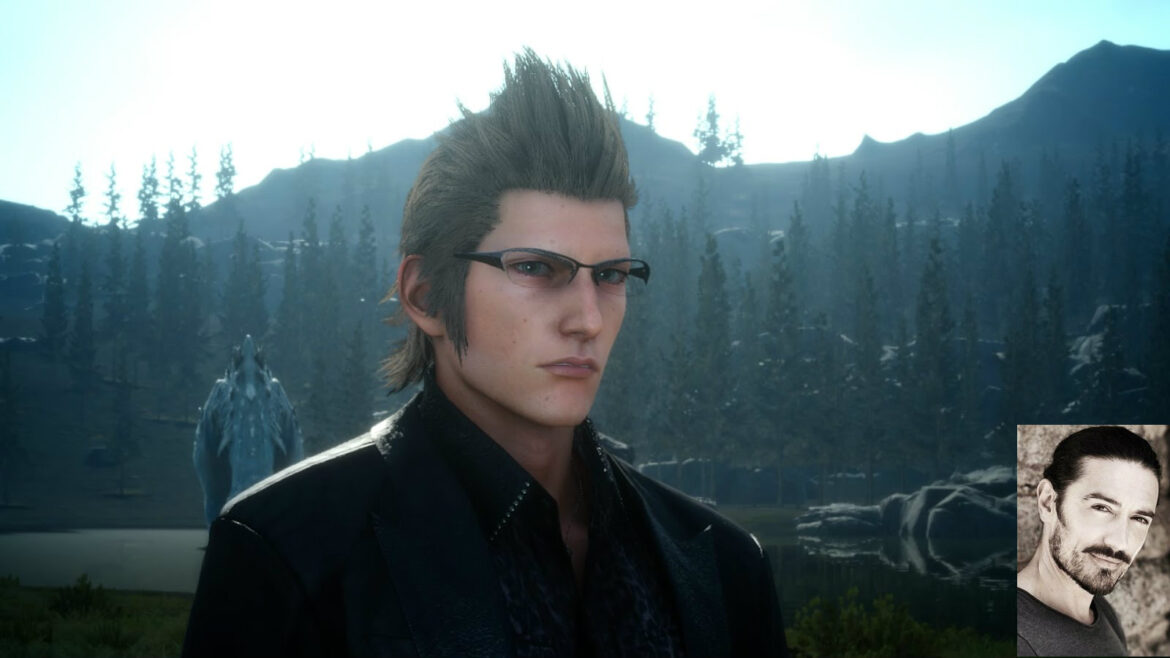 When it comes to creating a character within a video game, it’s often a layered process. First, there’s the initial creation of the character, but that’s only the first step.  After creating a character in the narrative it’s then time for the concept team to tackle it. What should a character look like that fully personifies their identity?  Once settled, it’s perhaps the most important stage, casting an actor.  While looks may help get a character so far, if the performance behind it isn’t convincing then there’s no saving it.

With Final Fantasy XV, the actors behind the central characters are integral, particularly, Noctis’ band of friends & allies.  Helping to bring one of Noctis’ friends to life is actor Adam Croasdell in the role of Ignis Scientia.  A character with sleek looks, there’s an underlying tone to Ignis that makes the character captivating. This is a key element of what makes a game work, and in the case of Final Fantasy XV, it presents an element of relatability and immersion to the player.

“I wanted to get into acting from a very early age. It was only as an adult that I realized it was because it afforded me the privilege of slipping out of the realms of my own world and into the worlds of others,” said Adam Croasdell in an interview with Two Left Sticks.

For Adam, acting wasn’t just a way to make a quick buck in a profession that — to many — seems glamorous. Instead, the finer points of performing in various ways are what drew Adam to acting, both on the stage and in video games such as Shadow of Mordor.

Speaking more on what drew him to acting, Adam elaborated, “There are few professions that allow a person to travel backward and forward in time and get away with things that one wouldn’t ordinarily be able to get away with oneself. Writers can do this and so can actors. I’ve acted on the stage and on screen, so video games seemed a logical next step. It’s an incredibly popular art form and one that, I think, will eventually fuse with the way we watch films.”

FROM STAGE TO POLYGONS

Adam’s transition to the world of video games proved to be a relatively smooth one. Whereas some actors have difficulty when entering a new medium, for Adam it was a natural progression of the theater work he did in plays such as Carousel.

“If it’s a job that just requires voice work – like in FFXV – then you work alone in a sound booth with the director, writer, and team just outside. That’s an adjustment, but it’s like being sealed into a diving bell and heading to the ocean floor with a team of engineers. It’s very quiet and you feel separated from the regular world. Then the magic begins.”

A performer can’t merely enter a role without having a level of trust in it, and for Adam, that starts at the base level: the writing.  “The moment the writing is good, I begin to trust the project. I like projects and characters that push the limits, that make me think.  That pique my interest because of their unique world-view. The human race has a near infinite capacity for getting itself into trouble, and that’s what makes us so fascinating.”

At times, there’s a base in place for characters such as bringing Romeo to life once again. But for characters that are new, what sort of approach does an actor like Adam take?  “Preparation is key.  You do your research and find the interest in your character with a view to putting it up there during the performance. Essentially you’re creating a library of information to draw upon, so that when action is called or the record button is pressed, you can riff with it and make some jazz happen.”

ENTERING THE REALM OF FINAL FANTASY

For some actors, the role in a Final Fantasy game would be the audition of a lifetime.  Though for Adam, his audition for FFXV was rather regular, simply for the fact that he wasn’t aware of what the project was.

“Ignis came to me in the disguise of a very normal-looking audition. At that point, it had a code name so I had no idea that it was Final Fantasy XV. If I had known it was the latest installment of one of the biggest video game franchises ever, I would have been more nervous.”

For games as massive as Final Fantasy XV, it can be difficult for actors to find the essence of the integral characters. Unlike TV, videos games feature scripts that have thousands and thousands of pages. So, the traditional table read is not an option, making tweaks to the script a bit harder to accomplish.

On the approach he took to crafting the role of Ignis, Adam said, “I worked closely with director Keythe Farley and writer Dan Inoue to find the tone for Ignis. Initially, I played him fairly comedic, but soon we realized that that didn’t quite work in the dynamic of the four lead characters. Instead, we decided he was much more cerebral, with overtones of James Bond. I thought I can work with this!”

For the role of Ignis, Adam went a step further to help create a sense of character and personality.  While Adam is British, he added a sense of poshness to his natural speaking voice to further create Ignis’ personality.  “Ignis is not only one of Noct’s friends, but he is entrusted with the boy’s safety and education. Ignis is enormously dependable and capable.  As such, I thought to give him the tone and mannerisms of an Oxbridge man would do the trick.”  Such a thing really does speak to the nuanced and thoughtful approach Adam takes with a character.

Final Fantasy XV provided some standout moments for Adam, both within the narrative and the characters themselves.  “Well, for one thing, his hair. He’s got great hair. They all do. I would joke with Keythe and Dan that, unseen in the game before the sun crested the mountains in the morning, the sounds of hairspray cans could be heard around their camp before the Chocobo crew each morning.”

Besides the perfectly quaffed hair of the leading four characters, Adam was drawn to Ignis in other ways.  On the surface, Ignis is a loyal friend of Noct, but there’s a deeper and more complex character within him. “Stylistically, I love the James Bond nature that we imbued Ignis with,” said Adam.  “He’s unflappable and a stone-cold assassin when it comes to the action. He’s also unwittingly funny, mainly with desperation at the hi-jinks of the rest of the crew.”

“The predominant highlight of the FFXV story for me has to be the breadth and scope of the world.  The landscapes, characters and creatures will blow your mind.”

Acting, in general, isn’t easy, nor is acting in video games.  Thanks to his skills, Adam has turned in an enjoyable performance as Ignis which helps create the brotherly atmosphere within Final Fantasy XV.  Despite the sense of closure at the end of FFXV, players can look forward to more Ignis via post-release DLC.