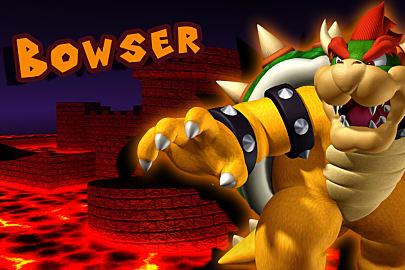 “Profiles in Villainy” is a series that will take an in depth look at some of the most interesting, iconic, or downright strange baddies in video games. Each profile will focus on how the visual design and writing behind a particular villain have impacted games. Who is the best of the baddest?

Few video game villains – let alone characters – have reached the iconic place in pop culture that Bowser has. His green, spiked shell and big toothy grin are immediately recognizable. Even non-gamers know who he is.

Part of that has to do with his place in one of the most important and successful video game franchises of all time, but as the primary antagonist in Mario’s Mushroom Kingdom, Bowser has a life all his own.

In 1985, the legendary Shigeru Miyamoto created Bowser for the original Super Mario Brothers. Even back then, Bowser was the primary antagonist and final boss for Mario. Like a lot of bosses, he was a straightforward threat: a fire-breathing, hammer-throwing dragon turtle. The immediate sense of conflict Bowser represents has helped make him into the iconic villain he is today.

Part of that comes down to what he wants. His motivation is clear. He wants to get Princess Peach and take over the Mushroom Kingdom. Bowser is driven by lust and greed; what’s more instantly understandable than two of the seven deadly sins? Stripped down to basic motivations, Bowser is a streamlined villain who represents a clear, physical threat to the player.

But underneath that simple, clear motivation is something a little deeper. Bowser’s story is a morality tale wrapped in a spiky shell. His desire for more and more land – and his intense sexual desire – always lead to his downfall. He never learns that no matter how he goes about getting Princess Peach or the Mushroom Kingdom, he will always fail because of his out of control id. On some level, you have to admire Bowser’s perseverance. Despite countless failures, he still gets back up in the morning and tries again. He and Mario are pretty similar in that regard.

But even in his lighter moments, Bowser’s obsessed with having more. His rivalry with Mario extends to go-karting and tennis, where he still tries to ruin Mario’s fun and take what’s his – in this case a trophy. Bowser is like Mario’s little brother. He always wants what other people have and he’s constantly jealous of Mario’s achievements. When he can’t have those things, he throws a tantrum and breathes fire all over the place.

Nintendo has often tried to make Bowser into a silly, comic version of himself for Mario to thwart, but despite that, he’s remained an iconic villain because of his looming physical presence, deadly schemes, and unabashed villainy.

Bowser’s physical appearance achieves a similar effect as his streamlined motivations. Just looking at Bowser’s character design lets the player know that he’s a threat. King Koopa, with his horns, longer snout, and fire breath, is a dragon taken straight out of Arthurian legend and dropped into the Mushroom Kingdom. For Western audiences, Bowser plays straight into the dragon and damsel in distress mythology that is so much a part of Western fiction.

Bowser’s design immediately lets the player know how to approach him as a character. His size makes it clear that he could be a threat, while his drake-like features make it clear that he is a threat. His form and function work together, perfectly.

Designed by Miaymoto and animator Yoichi Kotabe to resemble the Koopas that players had fought throughout the game, Bowser’s more turtle-like features also serve a purpose. His spiky green shell lets the player know right away “don’t jump on me.” It’s a great piece of design that works for both the narrative and gameplay, a lesson many developers have taken to heart when designing bosses. Of course players can’t beat King Koopa the same way they’ve beaten every other Koopa. He’s the king.

Bad To The Bone

That unique combination of dragon and turtle features make Bowser a comprehensive threat. He has offensive and defensive capabilities that challenge the player. In a lot of ways, he’s the archetypal video game villain. He gives the player a concrete goal and conflict to overcome while using his wits to make plans and his brute strength during boss battles. Bowser may not be the most complex villain in video games, but the reason he’s so iconic is because he doesn’t need to be. Miyamoto and co. designed a threatening villain unique to games that players love to hate. He truly is the baddest of the bad.

Stay tuned to Two Left Sticks, as we continue to delve into the villainous side of video games in our “Profiles in Villainy.” Next week we’ll take a look at a very different villain who knows the definition of insanity: Far Cry 3’s Vaas Montenegro.