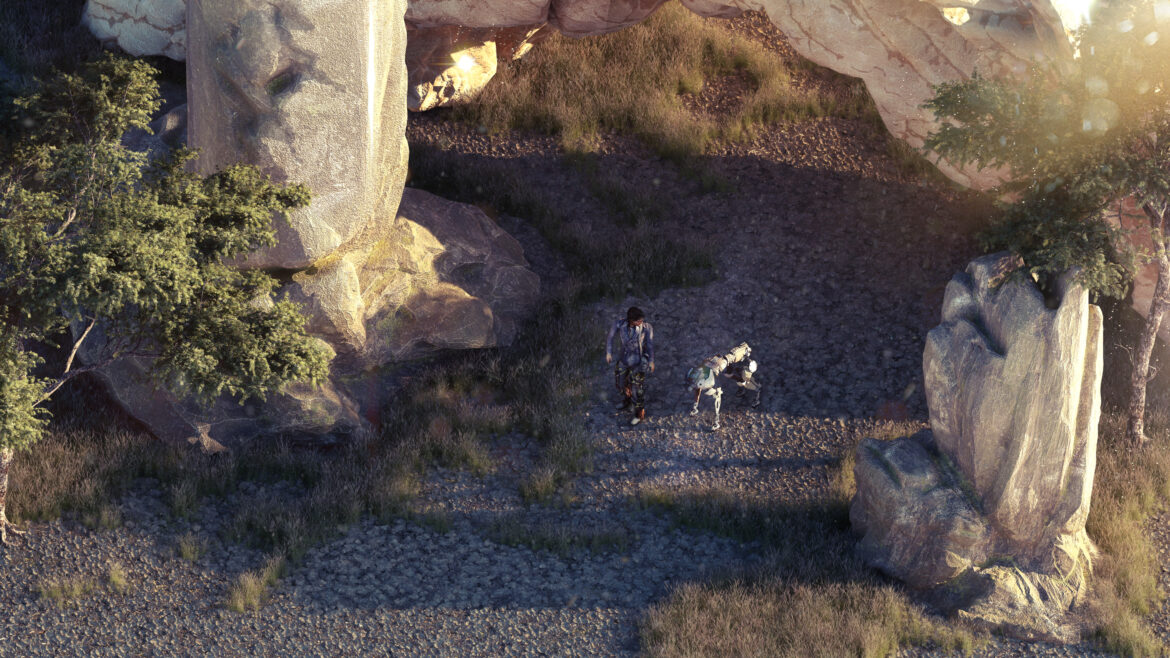 True talent, that’s when a creator takes something known and puts a new spin on it. A difficult task, no doubt, but when one succeeds it immediately stands out.  However, developers may find it especially difficult to escape a derivative vision when exploring popular sub-genres.

Take for example the post-apocalyptic sub-genre.  There’s a very definitive idea in the minds of many people of what the world would like if it came to an end, only to then reboot from the ashes.  The Mad Max film series presented a vision in the late 1970s that many creators still look to as inspiration.  Now, the new isometric adventure game Beautiful Desolation is presenting a vision of the apocalypse which could inspire a new generation of developers.

Created by the South Africa-based team The Brotherhood, Beautiful Desolation is the studio’s follow-up to their critically acclaimed 2015 title Stasis.  Now, The Brotherhood sticks with what they crafted so masterfully in Stasis, as they present another vision of a world unlike ours.

“I have been a fan of the post-apocalyptic genre since I first saw Beyond Thunderdome. If there was ever a genre that I felt as passionate about as I did sci-fi horror, it’s post-apocalyptic,” The Brotherhood’s Chris Bischoff said.  Inspired by what he saw at a young age, Chris wanted to capture that sense of wonder in Beautiful Desolation.

“There was this feeling I had when I played Fallout and wandered out into the unknown… that’s the feeling we want to capture in Beautiful Desolation. The openness of a world that is familiar yet alien, that feels tangible, but has a hint of magic and fantasy around it.”

Players have seen depictions of the apocalypse throughout the years, but Beautiful Desolation has a vision that will surprise players.  This is due to a few elements, the biggest of which is the setting, and the mixture of cultural traditions and high-end technology.

“Using Africa as our setting, with technology from an alternate historical future, fell into place through our many discussions on what our next game could be. Something amazing happens when an idea clicks into place. It becomes near effortless to come up with wild ideas and stories when you have this skeleton in place. Over a few weeks, the world and concepts fleshed out, creating the world, its history and colorful inhabitants.”

Set in the heart of Africa, Beautiful Desolation allows players to explore the lush forests while they see how technology has slowly morphed the landscape.  It’s on this basis that the game, not only presents an unseen artistic direction but provides something totally new.

“One game world that I think is the pinnacle of art design is the BioShock series,” Chris said. “I often look to the world that Ken Levine created as a starting point for how to tackle art direction. Everything is beautifully and masterfully crafted – from the smallest button on an elevator to the Big Daddy enemies. That high design was something I wanted to try and recreate from day one.” Chris continued, “Africa has strong design elements that are instantly recognizable, but others are more subtle. Living amongst this beauty has given us a unique perspective.”  The Brotherhood also looked at the core of Africa’s culture to craft the world of Beautiful Desolation.  This resulted in a visual ideology which steered the overall direction and tone of the project.

Of their approach, Chris said, “Wouldn’t you also consider Africa remarkably practical? Decoration comes in the form of color and pattern rather than construction. Mud, straw, grass, rocks – these heavily texture the world of Beautiful Desolation. These are also often adorned with even further colors and patterns painted onto them, most often naturally.” “Combining that ethos with the used nature of post-apocalyptic construction blended seamlessly as we started to work out the design language. But there are clashes – where the soft skin of animal hides meets the rusted metals of decaying cars. It’s those clashes that really give Beautiful Desolation a unique tribal punk feeling!”

The Brotherhood proved themselves as a capable developer with the release of Stasis.  For Beautiful Desolation, the studio is sticking with what they’ve established previously all while taking things to the next level.

“Simplicity combined with an overall greater purpose, to tell a story,” Chris said of the design approach. “Everything in the design is focused towards that goal. Every person you come across was a person with a full life and every place you visit existed before you arrived there. It’s one of the reasons I feel in love with the adventure game genre. It’s also one of the reasons why we want to carry on making these games.”

“That said, we’re still trying to push ourselves as designers. Beautiful Desolation will be less linear than our previous games. Having a large world map that is open to explore from the early parts of the game ties into that feeling of open-ended exploration – of venturing out into the vast unknown.”

A TALE OF BROTHERS

Known for the enigmatic tale spun in Stasis, The Brotherhood focuses on a less linear narrative in Beautiful Desolation. Similar to the sense of openness that Chris wants to capture in the world, the story will take be less restricting.

“Like our previous games, Beautiful Desolation will tell a definite story with a beginning, middle, and epic conclusion. However, the path that the character takes to get to that conclusion? Well, that is up to the player.”

Chris said this of the secretive narrative, “The story is a personal tale of the often tumultuous relationship that brothers can have (and we speak from experience), set against a massive epic science fiction tale.”

As the third project of The Brotherhood, Beautiful Desolation is another major leap for the studio.  Lauded critically for their work on Statis, the studio is moving forward confidently as opposed to feeling immense pressure.

“I think that the best art comes from limitations and pressure. Having a completely open canvas is a terrifying thing. But suddenly when there are borders and rules to abide by you can use that structure to create within.”

“We have always made the games that we would want to play – and Beautiful Desolation is no different. We want to tell an entertaining story and make a game that we can be proud of. I think as long as we keep on that course we’ll be successful.”

Considering The Brotherhood consists of only Chris and his brother Nic, it’s amazing to see such high quality at this early stage.  Taking an artistic risk, The Brotherhood has presented a vision of the future that seems foreign, and whose beauty comes from both the past, present, and future.

Beautiful Desolation is currently on Kickstarter. For more information, you can visit the official website .