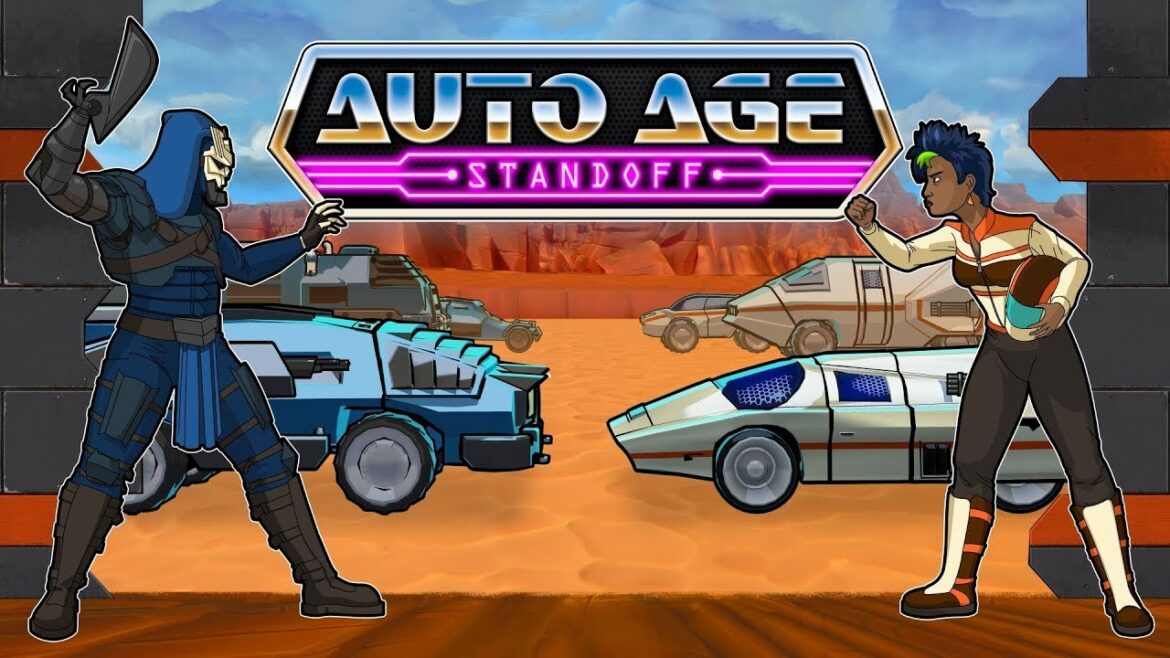 Going on the open road can be a liberating experience. Being able to go fast and let one’s mind roam as the scenery changes allow a moment of self-reflection. Even more liberating is going on the road and unloading a barrage of missiles and bullets at another car. While some folks wish they could do such a thing in real life during a moment of road rage, the only source for such stress relief is in the form of video games.

Attempting to bring back life to the vehicular combat genre is Auto Age: Standoff from Phantom Compass. By combining their fandom of car combat and injecting modern touches, Auto Age: Standoff may be what players had hoped the last Twisted Metal game to be.

The concept of Auto Age: Standoff arose from a pitch in 2014 to reboot none other than the Interstate ’76 franchise. Post the success of Twisted Metal in the late 1990s, others tried to claim the crown of the vehicular combat genre, and Interstate ’76 was one of those titles. Establishing a different vibe thanks to taking place in the 1970s, the franchise however never gained massive momentum.

“We had heard rumors that Activision might be looking at reviving some older titles, and many of us at our studio are huge car combat fans,” said Phantom Compass’ Company Director Tony Walsh. “So we put together a proposal. Instead of pitching to Activision (never got the chance) we pitched to several funding agencies here in Canada. We succeeded and were able to start production towards the end of 2014/early 2015.”

To use a word some developers don’t like, the vehicular combat genre is niche by today’s standards. With small bursts of rekindling it throughout the years, younger players today may have never experienced a Twisted Metal game, let alone know what Interstate ’76 is.

With this in mind, Phantom Compass is ensuring that both genre veterans and new players alike can hop in and appreciate Auto Age. “The driving physics are solid, arcade but with some good simulation balance. Pretty much anyone who’s played a driving game can handle that part. Then there’s the combat. We opted for a simple but skill-based system where all aiming is assisted. It’s like dogfighting. Your forward-mounted weapons have a little gimbal and will find targets within a cone of fire.” said Tony.

Thanks to a balance and user-friendly approach, Auto Age won’t burden players with having to keep up with individual ammo counts. While weapons will have abilities tied to cooldowns, a key with the project is to have fun, and fast, battles with no strings attached.

A staple of past vehicular combat games is that different characters offered various attributes. If a player wanted to use brute force they could select a tank like character, or a speedy sports car for quick run and gunning.

Auto Age will allow players to tailor their experience, but with more freedom. Rather than provide character based vehicles, Auto Age allows the player to customize their vehicle with different loadouts. These allow both game variety, and as Tony points out a level of strategy.

“Coordinated players will leverage each other’s abilities to accomplish team goals. If nobody takes a repair station dropper then no one is getting healed,” he said. “Someone can tank. Someone can assault. We have been playing with the same four stock loadouts for over a year and our customization system has been in design iteration the entire time.”

Despite the ability to select their chassis, players will need to be mindful when attacking as they won’t be invincible. Of this element, Tony said, “Very few light vehicles are going to survive a head-on attack versus a heavy vehicle. So the light player is going to have to resort to agility in that situation. Every weapon and “module” (equipment) offers an opportunity to change battlefield behavior.”

This lends a believable aspect in the combat rather than having all the vehicles feel like mere toys with no key characteristics.”As you’d expect, smaller vehicles can fit fewer, smaller items in the chassis, versus heavy vehicles with more capacity.”  Compared to the traditional games in the genre, it’s interesting to see the depth Phantom Compass is going for, and their continued tweaking to make sure the game feels as good as it can.

”As you’d expect, smaller vehicles can fit fewer, smaller items in the chassis, versus heavy vehicles with more capacity.”  Compared to the traditional games in the genre, it’s interesting to see the depth Phantom Compass is going for, and their continued tweaking to make sure the game feels as good as it can.

Muscle-bound bald men strapped in the middle of giant tires or killer clowns were key aspects of what drew players to titles such as Twisted Metal. Such personality played up the existing absurd elements in a way that players relished.

With their love of the genre, Phantom Compass is including both characters and lore in the game. “There’s a voiced mission-based tutorial in the game that introduces our main characters and gives some insight into the universe of Auto Age. We have some new videos in the works that also help to explain the backstory.”

Phantom Compass is making sure to deliver engaging maps, and are leaning more towards a traditional style. “There are all kinds of areas to discover with impromptu ramps or hiding places,” said Tony. This should please longtime car combat fans who desire fun gameplay opportunities to cause some mayhem.

“There are three maps in testing right now, we want to make sure any maps we ship with have hundreds of hours of playtesting. We’re getting feedback from beta testers on an ongoing basis.”

A level of familiarity will be present in Auto Age, yet Phantom Compass is injecting new elements to capture players. One concept that made it in the final game was an emphasis on verticality similar to Rocket League.

“One aspect of our level design that might be a bit different from previous car combat titles is that we use environment height a lot more. Cars can jump, dash and some vehicles can even wall-ride. So that provides a new dimension to play.”

As the art style illustrates, Phantom Compass is going towards a more cartoon style inspired by the 1980s. Elements like the explosions and other visual effects lend an immediate personality that permeates a fun atmosphere throughout.

Of the art style, Tony said, “Our preference was always to go with a non-photorealistic look. This evolved into a tribute to some of the anime-influenced American action cartoons of the 1980s like Jayce and the Wheeled Warriors, G.I. Joe and Transformers.”

“Half of the studio team grew up in the 70s and 80s. We took inspiration from some of our favorite toys, movies, and cartoons from that era,” he continued. The visual direction is one element, and to complete the 80’s cartoon atmosphere, the soundtrack also reflects this. “With our soundtrack, we’re working with modern Canadian artists who capture a retro style. Our in-game mixtape features Stilz, 20Six Hundred, Skull Fist, TWRP. It’s all part of a neo-80s/retro sci-fi vibe that we’re creating.”

A major project for Phantom Compass, the studio isn’t feeling immense pressure with Auto Age. “We always feel pressure to deliver on fun! Game-feel is a huge part of that,” said Tony. “We iterate a lot on each aspect, testing with our audience along the way. It’s not possible to please everyone, but a vast majority of the people we’ve demoed the game to enjoyed it. Most of us in the studio are car combat fans, and also have shooter and driving game experience. We are trying to deliver a game that has its own voice rather than copy a classic vehicular combat title.”

Right now Auto Age: Standoff is in the testing stages as it targets a 2017 release on PC. A console release may be possible but depends on the reception the game receives upon release. For the effort put into the project, Phantom Compass has done a tremendous job at bringing car combat back again, sans the repetition that holds other game homages back.