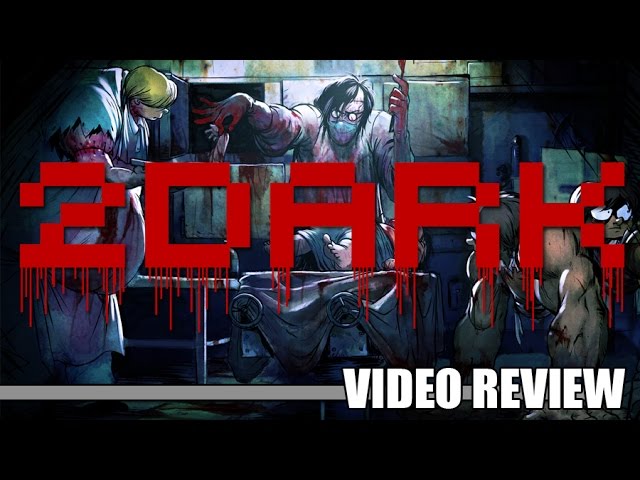 When someone thinks of horror they may conjure up thoughts of monsters or unstoppable killers. After all, in gaming entities such as zombies or men wielding swords while wearing triangular helmets are what people most associate the horror genre with. But like anything, horror can come in different forms – some of which are more personal.

For a parent, there’s nothing more horrifying than being unable to protect your child or losing them forever.  The new thriller 2Dark tries to bravely examine these topics, yet fails in the process.

New horror games are a common occurrence in the industry, but there’s something special about 2Dark. The creator of this new thriller is Frederick Raynal. Known for his quaffed hair, Frederick may be better recognized as the creator of Alone in the Dark. Despite this prestigious lineage, 2Dark never succeeds in following it.

Unlike other horror games, there’s a somewhat grounded premise in 2Dark, and what cultivates the atmosphere. The game follows a man named Smith after he loses his children in a sudden abduction. Down on his luck in the aptly named town of Gloomyditch, Smith has one thing that drives him: figuring out the mysteries of further child disappearances.

The newspaper for Smith’s slain wife and missing children.

On the surface the premise of 2Dark is interesting. Even if someone isn’t a parent, it’s easy to understand the pain someone may have after losing a child, and the simple motivation to save children in peril. Despite this, the game immediately has problems with the tone and execution of this theme, and the more traditional horror-like elements.

Rather than present child abductors/serial killers as the monsters they are, the game adds a sense of horrific whimsy to them. The abductors in the game range from clowns/circus folk, to masked individuals more akin to a B-movie villain. It’s understandable that developer Gloomywood didn’t want to create a game that mirrors reality since that could’ve brought the game down through a sense of depression or constant dread. The stylized art direction helps alleviate an uneasy sense of reality, which should’ve been enough as is.

However, coming across a serial killer clown forcing children dressed as animals to jump through a ring of fire is neither plausible nor believable. Instead, it comes off as comedic instead of sinister. Scenarios like those feel at odds with the tension 2Dark is trying to present. The game simply gets more contrived as it continues, and as such never resonates emotionally or dramatically.

A less than enjoyable circus trip

It would’ve been more horrifying to see a dead child or suspicious video equipment in a room and let one’s mind wander as to what occurred.  Instead, the overly stylized and comical scenarios presented feel odd for all the wrong reasons.

This is rather disappointing since it would’ve been incredible to see a game tackle untouchable subject matter, yet present it in a way that is both impactful and respectful. 2Dark never decides on what identity it wants. Is it a noir pulp tale with black horror? Or is it an emotional tale focusing on a broken man? This sadly is never figured out by Gloomywood.

It’s a shame the premise of 2Dark never catapults the experience since the base gameplay has moments where it shines. Players need to explore labyrinth environments in near darkness with only a flashlight or lighter for illumination.

Stealth is key in the game, both to avoid enemies, who are sometimes in pairs, and to help rescue the children. The stealth mechanics feel thought out with enemies having vision cones, being able to hear, and actually pursuing the player through different rooms.  Walking in darkness can render the player invisible, and it’s possible to track enemies through echolocation. But there aren’t a plentiful amount of strategies to use in the game other than avoiding detection and hoping for luck in some instances.

The main crux of 2Dark is rescuing the abducted children, and when this occurs the game undergoes a slight change. Rather than grabbing a child and they suddenly disappear in a game like way, players must escort them to a designated escape area.

Bucking trends, the escort aspect of 2Dark actually works. Despite the horrifying circumstances, the rescued children will follow the player, though at times they need a bit of assistance. This usually comes in the form of having to give candy to a child when they see a dead body or if they become too afraid. This mechanic may sound annoying, but it comes across well since it presents a small amount of realism. After all, if a child actually saw a dead body chances are they would freak out.

Smith prepares to rescue a child

Building upon the escort mechanics more, players can also issue commands to the children. This helps in instances where it’s best for the children to stay still or quiet if an enemy lurks nearby. Using these commands is key since the children can die, but if they do it won’t result in a game over. As usual, the only way to fail is if the player dies, of which there are plenty of opportunities.

Where 2Dark starts to fall fast is when combat appears, and during boss encounters. Keeping to the tradition of the horror genre, players won’t have abundant resources. Bullets are scarce so pipes will become go-to weapons. As such, trying to attack an enemy that is throwing knives can be trouble, both when alone or trying to escort the children to safety.

Combat also feels sluggish. Not only do weapons have different attack speeds, but an actual delay feels present between pressing the attack button and seeing the animation appear on the screen. As expected, this can result in scenarios where death is quick despite attempting to attack.

It also doesn’t help that the item management system is clunky. Presented real-time on the screen, players have full access to their items without needing to drop things or store them in a locker. Actually switching between items during exploration is fine. But attempting to run from an enemy and frantically switch to a new weapon by scrolling through items with the D-pad can be hectic for all the wrong reasons.

Boss battles provide even more frustration. In one such instance, a boss will teleport from one side of the environment to the other like Jason Voorhees. This isn’t clever design and feels like a cheap tactic to cause “shock” and frustration.  Such frustration can also be found in environmental deathtraps which are impossible to see until it’s too late.

Players may also be saving constantly since there’s no autosave feature. So if a player doesn’t save at the right moment, they may need to redo an entire section unless they opt to restart the stage. This is one of the aspects of the game which feels old-school, but it can present a disadvantage and cause easy annoyance.

A MOST DEPRESSING RESULT

With a premise that’s different and impactful, 2Dark should’ve been a standout game. Instead, it’s one which has moments where it shines, and others where the flaws are prominent. It’s almost frustrating that 2Dark isn’t as good as it should’ve been since it has a good mix of concepts.

All the elements are there such as solid stealth mechanics, a dreary atmosphere, and a relatable premise. These are however wasted in a game which feels tonally schizophrenic and difficult for the sake of it. Given these faults, it’s hard to recommend 2Dark since it lacks to make a positive impact.